The Figure Eight of Energy

It's hard for me to place exactly when this magical piece of imagery began popping into my head, but I believe it started with Miranda Scott at Meadowbrook Stables. Miranda's program was based with her relationship with Kathy Kushner (don't quote me on that, but that's the name that pops into my head with the greatest certainty), and this concept originated with Kathy from what I know, though it's possible that she too learned it elsewhere and passed it down. While I had lots of different pieces of knowledge, this image allowed me to put them all together in a way that made the most sense.

At Meadowbrook, I was suddenly riding much less and training much more - every Tuesday - Sunday, about 5 hours a day. I had never been a full time instructor before, and at this job presented me with a new challenge: What was I going to do with all that time?

Fortunately, Miranda's Figure Eight of Energy, Elizabeth's system of flatting a horse, and George's concept of Forward + Straight/Bent + Collected became the foundation for all of my lessons, and every exercise and concept came from one of these three pillars. I'll get more into the favorite exercises that I put into practice later in the blog, but first, I need to explain this one last piece of my "program."

So, without further ado, here is the Figure Eight of Energy*: 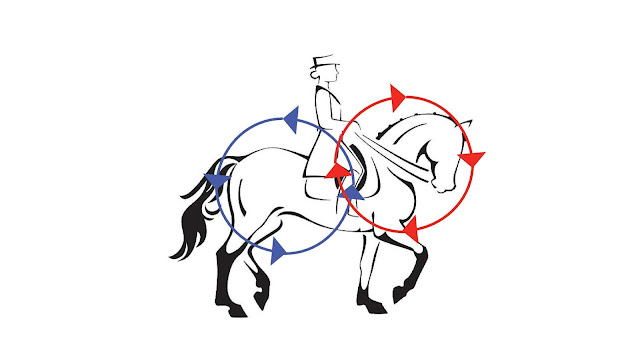 It's pretty much what it looks like. You are on your horse, and you want it to use its back, butt, and neck in order to create roundness and build correct muscle. Your leg engages the rear end, which then makes the horse reach under with its hind legs and push itself forward. This is the engine piece of the circle. That energy then travels into your seat and through the horse's back, where it's your job to send it up and over through its neck, right over the poll (the top of the horses's head between the ears), and through the bit, where it travels back into your hand. By then, you're collecting more energy from your leg around the horse's hindquarters through your seat up and over its neck through the bit into your hand, etc, etc.

To put it to practice, start on establishing just the first part - getting engagement from the back and then managing it with your seat - don't worry about the head until this first piece of the figure eight is consistent. By simply focusing on the first section, and the part of the horse that you can't see while riding, but can only feel, it will take your focus OFF of your hand, which might be trying to hold energy that's not there and being part of the problem, not the solution. Even if your horses nose is in the air or you're worried about an ugly picture, just stay consistent in asking for that motor to GO. Over time, once the butt and back start to engage, the head will naturally fall into the most comfortable place - soft of round and creating that final circle of energy.

The next time you're in the saddle, especially on a horse that might be struggling to create roundness and balance, try holding this picture in your head. You'll be surprised what this might do for your riding, just as I was surprised at what it did for mine.

* I've also seen a modified version of this diagram called The Figure Eight of the Aids, and this is probably the same concept, only I wasn't taught that version originally, so this one makes more sense to me.

Mares - Everything They Say is True